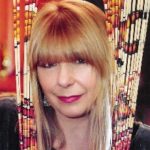 Annie Haslam tells a story in “The Vinyl Dialogues” that involves flying potatoes, white pants and a British a cappella group named The King’s Singers.

So when I had lunch recently with the lead singer of the band Renaissance at a quaint little place called the Vintage Grille in Doylestown, PA, I was keeping a wary eye on what she was going to order.

Annie ordered a breakfast plate, which included fried potatoes cut into squares. Fortunately, I had the good sense to not wear white pants to that lunch. One never knows which establishments these days serve the flying potatoes.

It was the first time I had met the wonderfully charming Haslam. Our telephone interview for the book in March 2013 was about her recollections and memories of the Renaissance album “Scheherazade and Other Stories,” released in 1975.

Still a head-turner at age . . . well, even though she told me how old she was – without me asking, by the way – I’m not going to reveal it here. It’s not the gentlemanly thing to do, and there are so few of us left.

We talked about a lot of things over the course of an hour, including the state of our world (she’s a strict environmentalist). I loved listening to her stories about the music of the 1970s and the music business in general.

Annie lived the music history of the 1970s. She’s still making music and she has for several years had a second career as a painter. She added that she has no intention of writing a book about her life because she likes to look forward and not backward.

It was a delightful visit with an artist who is as down-to-earth as a fan like me could hope.

And I’m happy to report that I did not get hit with one flying potato.

You can get the latest on Annie and her career at www.anniehaslam.com. For the latest news on Renaissance, go to www.renaissancetouring.com.

Annie HaslamRenaissanceScheherazade and Other Stories