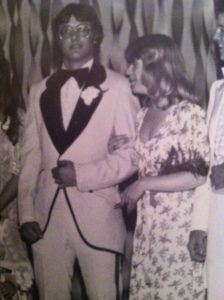 The only known picture to exist of Mike and Sue as members of the prom court at the 1976 junior/senior prom at Pekin Community High School.

It wasn’t my first kiss, but it was a special kiss.

In the spring of 1976, I was the 17-year-old president of the junior class at Pekin Community High School in central Illinois.

One of my “duties” — in addition to running around being a teenage goof-off — was to help plan the junior-senior prom.
For the record, I was much better at goofing off than I was at planning a prom.

Three Dog Night had split up by 1976 but I was still a big fan in those days, despite having never had the chance to see the band perform in concert.

My big contribution to the prom that year was pushing for “An Old Fashioned Love Song” — written by Paul Williams and made into a hit by Three Dog Night — to be the theme of the dance. As class president with hip Elvis sideburns and a puka shell necklace, I apparently exhibited enough charm with the female members of the prom committee to get my wish on the prom theme.

I was also fortunate to have been elected to the prom court that year — a goof-off with Elvis sideburns who wore a puka shell necklace apparently also held some sway with the voting block of students — and it was as a member of the prom court that provided the backdrop for the unexpected and special kiss.

My escort for the prom court introductions was Sue Brown. As we waited to be introduced to the student body that evening, Sue and I stood there, her arm in mine, and our eyes met.

And we kissed. It was more than a peck, but it wasn’t a passionate kiss, it wasn’t a long kiss. Sue didn’t happen to be my date for the evening — oops — but I sure do remember that kiss, even all these years later. It happened just as “An Old Fashioned Love Song” began to play on the school sound system to kick off the prom court introductions.

I saw Sue Brown — she’s married now with a different last name — only once in the next 38 years. She happened to be a teacher at the elementary school that my niece and nephew attended and we sat together at a basketball game and chit-chatted for a bit.

The prom night kiss from years earlier never came up.

In 2012, I published my first book, “Dancing in My Underwear: The Soundtrack of My Life,” a memoir about growing up with the music of the 1960s and 1970s, and I planned a book signing event in my hometown of Pekin, Illinois.

A few weeks before the event, during a phone call with my sister Casey, she told me that she had seen Sue at the grocery store and had invited her to the event. Sue said she would attend.

“Hey, Sue Brown is going to be at the book-signing event in Pekin,” I said to my wife, who had heard the prom night story and was familiar with the particulars. “You know, if she shows up, I’m going to have to kiss her.”

My wife’s reaction was predictable: “I don’t think so, pal.”

The book-signing event went off without a hitch, with one exception: Sue Brown was a no-show.

But every time I hear Three Dog Night’s “An Old Fashioned Love Song,” it takes me back to that evening of the junior prom in 1976, back to standing next to Sue Brown, styling and profiling in that powder blue tuxedo and felt bow tie that I was sporting, right to that moment when our lips met and created a personal teenage memory that I’ll never forget.

“An Old Fashioned Love Song” was indeed “one I’m sure they wrote for you and me.”

Or at least for Sue Brown and me.