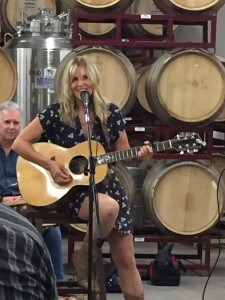 Lizanne Knott, with Tommy Geddes on the drums.
(File photo by Mike Morsch)

It was like sitting around the Algonquin Round Table in New York City in the 1920s with the likes of great writers of the time – people like Dorothy Parker and George Kaufman.

Only the writers this time were musicians – like David Crosby, Stephen Stills, Graham Nash, Jackson Browne, Joni Mitchell, Howard Kaylan and Mark Volman – and it was the early 1970s.

And the venue wasn’t the historic Algonquin Hotel, in which the greatest writers, critics and actors of that earlier era gathered to exchange wordplay and witticisms. It was the living room of Joni Mitchell’s Laurel Canyon home in California.

There, on any given Friday night, some of the greatest singer-songwriters of their generation would pass around a guitar and play some of the songs they had been working on, songs that hadn’t yet been recorded. Songs that would someday be big hits.

“It was the early days of an incredible singer-songwriter movement in Los Angeles,” said Kaylan, who along with Volman were then members of the Turtles. “You were hearing the best songs that these guys had to offer. So if Graham was working on ‘Teach Your Children,’ that’s what he was playing for everybody.”

As the Friday night jam sessions continued, Kaylan thought that the competition among the artists to produce quality songs became more intense.

Nash didn’t see it that way.

“I never thought it was competitive, like ‘Look at what I wrote.’ Stephen and David and Jackson and Joni are incredibly good songwriters,” said Nash. “I didn’t feel competitive. I thought it was the joy of the discovery of a new song. We had a lot of music in our lives and that’s what we did.”

They were just being musicians, Nash recalls. 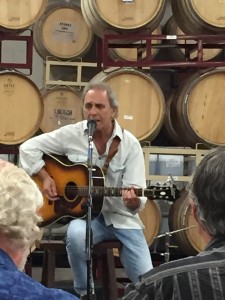 “When we’d go anywhere, we’d take our guitars with us. That’s what people did. Everyone carried their guitars around,” said Nash. “And of course, those people – me and David and Stephen and Jackson and Joni – we were very creative. We always had new songs, and the first thing you did is play them for your friends.”

That story, about Friday nights at Joni Mitchell’s place, is excerpted from Volume I of the Vinyl Dialogues. And I was reminded of it when some local Philadelphia-area musicians got together Saturday night at a place called The Underground in Lansdale, Pennsylvania.

Lizanne Knott, Skip Denenberg and Michael Braunfeld – accompanied by the talented and always entertaining Tommy Geddes on drums – got together for an “in the round” show where each artist alternated telling stories and playing original songs in an intimate setting to an intimate audience.

It was not unlike sitting in Joni Mitchell’s living room listening to Crosby, Stills and Nash and Jackson Browne debut original material. If one were somehow lucky to be able to have done that.

This is not the first time that Lizanne has done a show like this. She and Skip partnered with another Pennsylvania singer-songwriter Craig Bickhardt for a similar show earlier in the summer.

There is a lot to like about a show like this for someone like me, a guy who asks artists about the back stories of songs and making records and then writes a series of books about that. As a writer, I like to hear about the inspiration and evolution of a song. And I particularly like it in a relaxing and intimate atmosphere, like we’re all just a bunch of friends sitting around the living room listening to music.

Which leads me to this point: Explore the local music scene in your area. If it’s anything like the Philadelphia area, there are some creative and talented artists who make some great music. Support those folks in their efforts, go to their shows and buy their CDs or downloads.

But that’s OK. I’ve got a some highly creative singer-songwriters right in my own neighborhood and I love their music just as much. Plus I get to sit right in the front row and listen to all those wonderful stories and songs.

Teach your children that.