That’s how we put a setlist together back in those days. And even though I got fairly adept at hitting the “record” button when one of my favorite songs came on (actually you had to hit “play” and “record” at the same time, which increased the degree of difficulty when doing it in the dark), my reaction time was always a tick or two behind. So my setlist of favorite tunes I played on that cassette recorder was inevitably missing the intros to the songs.

I was fascinated in the early to mid-1970s by a group called The Stylistics. Unbeknownst to the young me at the time, The Stylistics were part of what would become The Sound of Philadelphia (TSOP) or “Philly soul.” The songwriting and production team of Kenny Gamble and Leon Huff had formed Philadelphia International Records in the early 1970s and was creating a new sound, one that they believed would rival Motown. Artists like The Stylistics, The O’Jay’s, Harold Melvin and the Blue Notes, The Three Degrees, Lou Rawls and Billy Paul were making some great music in Philadelphia in those days. 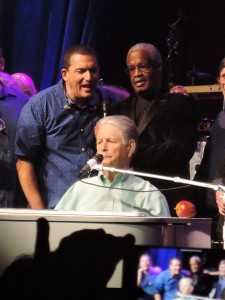 All of which was lost on a kid growing up in central Illinois. I had no idea what was unfolding in the Philadelphia music scene at the time, all I knew was that I liked The Stylistics a lot — particularly their song “I’m Stone in Love With You” — and that I wasn’t quick enough to get the entire song from start to finish on my cassette recorder.

And, of course, I had no way of knowing that I would move to Philadelphia some 30 years later as a writer, become immersed in the Philadelphia music scene and interview many of the artists that developed TSOP and “Philly soul,” including the original lead singer of The Stylistics, Russell Thompkins Jr., for a chapter on the group’s first album for “The Vinyl Dialogues Volume IV, From Studio to Stylus.”

So it was with great excitement that I greeted the news that Thompkins Jr., with that beautiful lead falsetto voice on “I’m Stone in Love With You” and those other great Stylistics hits, would be a special guest at a concert co-billed by Brian Wilson of the Beach Boys and The Zombies at the Tower Theatre in Upper Darby, suburban Philadelphia, on Sept. 28, 2019.

I was a Beach Boys fan long before I was a fan of The Stylistics. I grew up with my parents’ record collection in the 1960s, and the Beach Boys have always been my favorite band. I love the harmonies and I love Brian Wilson’s sweet falsetto voice from his early years on all those classic Beach Boys tunes.

So I already had my tickets for this show when I got the news that Thompkins Jr. would join the festivities. Having seen Brian Wilson, Al Jardine and their group — Mike Love and Bruce Johnston also have a group that tours under the name “Beach Boys” — many times over the years, I had originally been drawn to this show because of The Zombies. Inducted into the Rock and Roll Hall of Fame in 2019, I love the band’s hits, including “She’s Not There,” “Tell Her No” and “Time of the Season.” I had not seen them live to this point and the ticket price for two R&RHOF bands was quite reasonable. 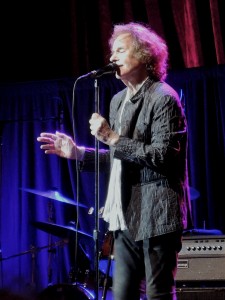 The Zombies opened the show and absolutely killed it. Lead vocalist Colin Blunstone and vocalist and keyboardist Rod Argent can still sing. In addition to their hits, they also performed their complete 1968 album “Odessey and Oracle” without interruption, and it was, in a word, brilliant. To add an even more special aspect to the show, they were joined by original members Hugh Grundy and Chris White for the “Odessey and Oracle” portion of the set. The Zombies would have well been worth the price of admission by themselves.

Next up was Brian, Al and the band, which for the past few years has included Blondie Chaplin, a singer and guitarist who joined the Beach Boys in the early 1970s and who would sing the lead on the Beach Boys hit, “Sail on Sailor.” Chaplin, who later would become a vocalist, percussionist and acoustic rhythm guitarist for The Rolling Stones, lends a bit of eccentricity and strutting not normally seen at a Brian Wilson show.

Brian’s band is top-notch and has been for years. Co-founding Beach Boys guitarist Al Jardine is still in great voice, and Jardine’s son, Matt, now handles all the high falsetto parts that Brian used to sing. New to this tour, billed as “Something Great From ’68” to go along with The Zombies’ “Odyssey and Oracle” album, was the addition of some songs from from the Beach Boys’ 1968 album “Friends,” as well as the group’s 1971 album “Surf’s Up.” 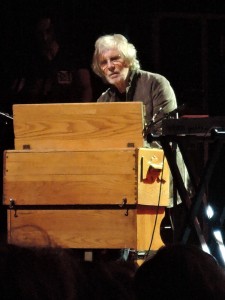 Rod Argent, original keyboardist and vocalist for The Zombies.
(Photo by Mike Morsch)

Brian himself doesn’t do much of the heavy lifting anymore. He still handles some lead vocals on classic Beach Boys songs like “God Only Knows,” (his brother Carl Wilson sang lead on the original song), “Good Vibrations” and “Heroes and Villains,” but for the most part, Brian is content to sit at the piano and oversee the proceedings these days, soaking in the love from the audience.

Of course, I was anxious to see how Russell Thompkins Jr. was going to fit into the show and how the surf and sand music was going to intersect with Philly soul. We didn’t have to wait long to find out.

Just a few songs into the set, Thompkins emerged on stage for Wilson’s hit single, “Don’t Worry Baby,” first released in 1964. Matt Jardine took the first falsetto verse, then handed the lead vocals off to Thompkins Jr. for the remainder of the song.

It was both an inspired and perfect choice for the voice of Thompkins Jr. According to Wilson, he had written “Don’t Worry Baby” in an attempt to capture the essence of what he’s said is his all-time favorite song, “Be My Baby” by The Ronettes, with Ronnie Spector on lead vocals, released in 1963. 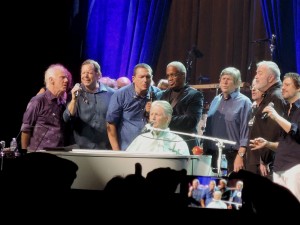 Everyone gathered around Brian Wilson at the piano for the final song of the evening, “Love and Mercy.”
(Photo by Mike Morsch)

Thompkins Jr. nailed “Don’t Worry Baby” in what was literally a chill-inducing version for those of us who are Beach Boys and Stylistics fans. He was rewarded with a standing ovation by the Philly faithful. Although he didn’t take lead vocals on any other songs during the show (a slight disappointment to me), Thompkins Jr. did return to the stage to lend backing vocals for all the songs in the encore, including “Surfin’ U.S.A” and “Fun, Fun, Fun.”

It was the final co-billed appearance on this tour for The Zombies with Wilson and they left it all on the stage. And Wilson is one of the most famous and accomplished artists of our era. The addition of Thompkins Jr. was just icing on the cake for this concert.

It’s gonna be difficult to find a better evening of music than that for me. 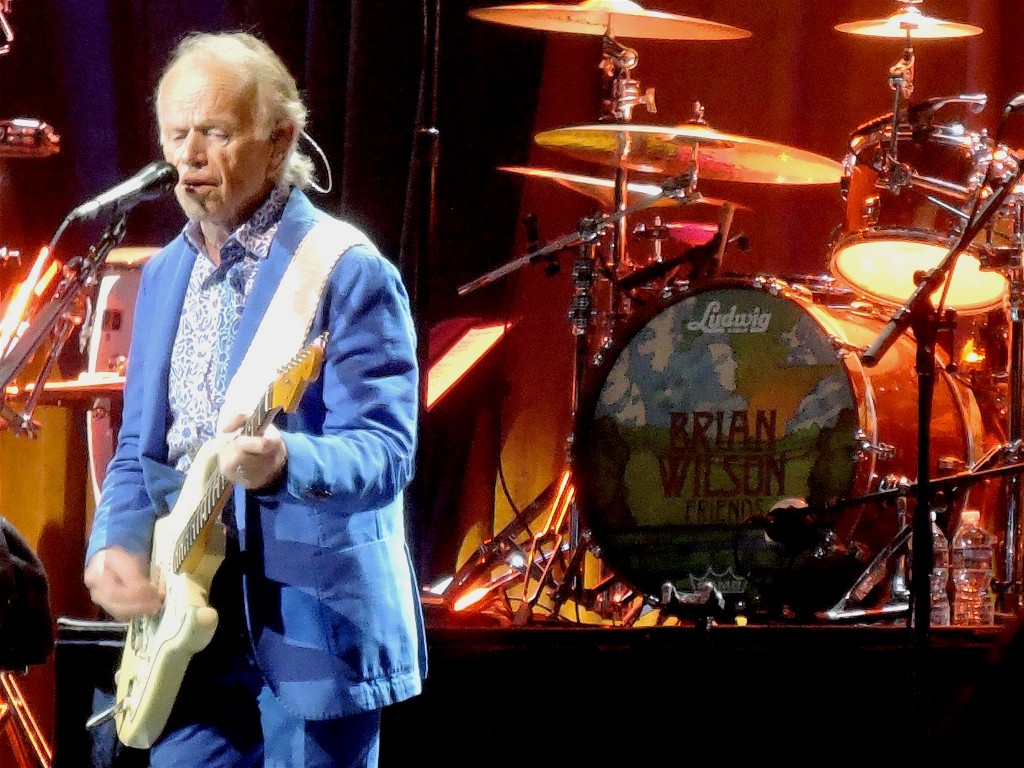