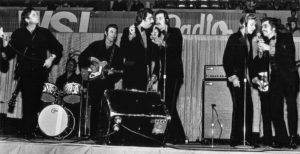 The Statler Brothers opened for Johnny Cash from 1964 through 1972.

Sometimes, all it takes is a foot of snow to provide a little inspiration. That’s how the 1972 album “Innerview” by the Statler Brothers made it into “The Vinyl Dialogues.”

In early 2014, it snowed quite a bit in the Philadelphia area, most of it I think, right in my driveway.

Snow makes me grumpy and I have threatened – to no avail – many times to whack Mother Nature upside the head with my snow shovel if she didn’t lay off my driveway.

But over the years, I have changed my philosophy when it comes to shoveling snow. I used to believe the best way to attack the issue was to wait until it stopped snowing, then go out and shovel it all at once. The problem is that if we get a foot or more of snow from one storm, it’s difficult to lift that much snow.

So in recent years – and because of an aging back – I’ve taken a different approach. I now go out several times during a storm, maybe every two or three hours, and shovel a few inches at a time. It does require going out in the storm more often, but shoveling snow three or four inches at a time as opposed to 12 to 15 inches at the end has proven easier for me.

In addition, shoveling snow is downright unpleasant and boring. It was during one such snow event in early 2014 that I decided I needed a “Shoveling Theme Song.” For no particular reason – in between cursing a blue streak at that ratfink Mother Nature – the Statler Brothers’ song “Flowers on the Wall” popped into my head while I was clearing the driveway.

“Counting flowers on the wall, that don’t bother me at all.
Playing solitaire til dawn, with a deck of 51.
Smoking cigarettes and watching Captain Kangaroo.
Now don’t tell me, I’ve nothing to do.”

The way I interpret that, the guy in the song keeps himself busy doing essentially nothing, even though he thinks it’s something. Those lyrics resonated with me as I kept myself occupied while doing a relatively unpleasant task three for four times in the same evening.

When I got finished with that round of shoveling, I came back inside and researched the song. It was released in 1965 and peaked at No. 2 on the Billboard chart in early 1966. I was near the end of writing a book about memorable albums of the 1970s and the song and the album it appeared – the group’s debut album, also called “Flowers on The Wall,” didn’t qualify.

A little more research revealed that the Statler Brothers spent eight years, from 1964 to 1972, opening for and traveling with the great Johnny Cash. When it came time for the band to break out on its own – with Cash’s blessing – they started writing more songs and making more albums.

At about that time in 1972, the Statlers released an album called “Innerview,” which featured what would become their next big hit, “Do You Remember These,” the group’s second No. 2 single.

Of course, I wondered if I could track down the Statler Brothers and if any of them would talk to me about the album “Innerview.” The 30 chapters completed for “The Vinyl Dialogues” at that point were all about rock and roll albums. There were no country albums included, which was an oversight on my part because I am also a big country music fan.

It was fairly easy to track down the Statlers. The group retired from touring in 2002 and three of the four are retired and living in Staunton, Virginia, their hometown.

I explained the book project and made my interview request in and email and sent it to the Statler Brothers’ website. The request made its way to Debo Reid, who handles media requests for the group. He is the son of Don Reid, lead singer and songwriter on many of the Statler songs.

And Don Reid agreed to be interviewed about the album “Innerview.” What a wonderful conversation it was. Mr. Reid is articulate and humble and his recollections are detailed. He is a gentleman through and through, and despite enormous success, he has remained grounded and appreciative of all life has given him.

There was an incredible warmth and sincerity coming through the phone from Mr. Reid during the interview and I think those qualities show through in the finished chapter.

And after his retirement, Don Reid has become an author himself, so we chatted a bit about that as well. He was very much in tune with the reasons why I wrote this book and the feelings a writer experiences during a writing project.

I’ve been blessed to have had so many great interviews over the years. This was another one. It is so much fun talking to the people who made the music I grew up with.

But what I love the most about this chapter is how while shoveling snow, a Statler Brothers song popped into my head. And that simple thought led to another great interview that ended up being a chapter in The Vinyl Dialogues.

I would have never thought that when I first schlepped out to the driveway during that snowstorm.