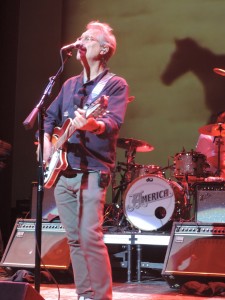 Gerry Beckley of the band America performs during the encore Dec. 7. 2018, at the Santander Performing Arts Center in Reading, Pennsylvania.
(Photo by Mike Morsch)

It wouldn’t be an America concert if it didn’t include the mention of George Martin. And the band’s Dec. 7, 2018, concert at the Santander Performing Arts Center in Reading, PA, would be no different.

So just how did legendary Beatles producer Martin end up working with the Dewey Bunnell, Gerry Beckley and Dan Peek of America? And what role did bacon and eggs play in that pairing?

As detailed in Volume I of The Vinyl Dialogues, there were days during long recording sessions when Dewey Bunnell would look forward to the “egg-and-bacon take.”

Bunnell, Beckley and Peek were recording their fourth studio album, Holiday, in 1974 at AIR Studios in London. They were working with Martin, who had produced all of the Beatles’ original albums.

Bunnell remembers it as a special time. During the days of recording the album, he and his bandmates would frequent a little cafe in the area or eat at the studio commissary.

“We say ‘bacon and eggs,’ but the British say ‘egg and bacon.’ Every day we’d do some takes and George would say, ‘Right lads, one more take.’ And we’d say, ‘But George, we’re getting hungry.’ And he’d say, ‘OK, this is the egg-and-bacon take.’”

The band’s eponymous 1971 debut album had been produced by Ian Samwell, a British songwriter and guitarist who had worked with Sir Cliff Richard; after relocating to Los Angeles, their second and third albums, Homecoming in 1972 and Hat Trick in 1973, were produced by the band members themselves.

“Gerry and Dan and I produced the second and third albums and we realized we were spending a lot of money,” said Bunnell. “Producing records isn’t just about saying, ‘Oh, that sounds good, let’s put a tambourine on the next track.’ There’s a lot of administrative work and booking studio time and paying bills and all that kind of stuff.

“By the time we got to the third album, we said, ‘This is too much work. We need a producer,’” said Bunnell.

America was going to start at the top in its search for a producer and was hoping to get Martin to sign on.

And timing is everything.

David Geffen — who had managed Crosby, Stills and Nash as well as Laura Nyro — was also America’s manager at the time.

Geffen knew Martin well enough to arrange for him to meet Beckley, Bunnell, and Peek. Incidentally, Geffen would go on to create Asylum Records in 1970, Geffen Records in 1980, DGC Records in 1990, and become one of the three founders — along with Steven Spielberg and Jeffrey Katzenberg — of DreamWorks SKG Studios in 1994.

“We were these young whippersnappers and George was coming out of the Beatles thing — it had been a few years since they had broken up — and he was basically available,” said Bunnell.

And after working with the Beatles, Martin finished a project with a band called Seatrain, and was looking around for his next project as well.

Martin was in Los Angeles for the 46th Academy Awards show when Geffen approached him to meet America’s principals. Martin had scored the soundtrack to the James Bond film Live and Let Die, the title track of which was written by Paul and Linda McCartney. The song was nominated for “Best Original Song” that year, but lost the Oscar to “The Way We Were” by Marvin Hamlisch. 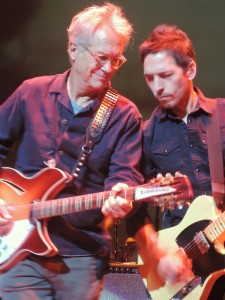 Martin met with the band and, according to Bunnell, formed an instant rapport. Bunnell said he thought that it may have been because of a common bond: he, Beckley and Peek were all children of American servicemen who had British wives, and they had first met and formed the band while all their fathers were stationed at the United States Air Force Base at RAF West Ruislip, London.

“So we hit it off and he said, ‘Sure, but I understand you spent a lot of time on your last album. I must ask that you come to London and we record it in my studio.’”

“We had arranged the songs the way we liked to do things, with the vocal harmonies and the acoustic guitar stuff,” said Bunnell. “And George took it from there. He was very impressed that we were prepared. I think we did the whole album in less than three weeks — 17 days or something like that. Mixed and ready to go. And George said, ‘Well, this is nice.’”

“When we were making the third album [Hat Trick] in Los Angeles at the Record Plant, it was party time,” said Bunnell. “Late sessions. And the Record Plant was a cool place to hang out.

“But the British studio — AIR Studios in London — it was like we were in some kind of factory,” he said. “It was very sterile and weird. George was from that school having produced the Beatles, and he still had a lot of that work ethic going on, which was good because it reined us in.”

Besides the fact that the band was in awe of Martin, Bunnell said that Martin was from a different generation.

“He was this princely guy,” said Bunnell. “Sweet and nice and full of anecdotes. We realized right away that it was all business here. We like to say that he sophisticated the sound, if you will, because with George you got an arranger in terms of symphony and orchestral arrangements.”

Dewey Bunnell, left, and Gerry Beckley celebrated their 48th year with the band America in 2018.
(Photo by Mike Morsch)

One of Martin’s favorite phrases, Bunnell said, was “Don’t gild the lily.” Martin wasn’t one of those guys who wanted to keep layering stuff on a song. “If you’ve got a nice tasty thing, an overdub or a vocal that works, let’s not bury it under a lot of varnish,” Bunnell recalled Martin saying.

“Tin Man” was based on the general theme of The Wizard of Oz, which Bunnell said has always been, and is still today, one of his favorite movies.

“I love that film and the whole premise of people having those things already in them that they seem to be desperately seeking – courage and love and all those things,” said Bunnell.

Bunnell likes his songs to paint pictures — and he likes a lyric that takes the listener some place in his own mind within the first few lines of a song.

And then there’s the great grammar in “Tin Man.”

“I always say I don’t know where my grammar really comes from, other than maybe in and of itself, it’s colorful. ‘Oz never did give nothing to the Tin Man, that he didn’t, didn’t already have,’” said Bunnell. “It’s sort of poetic license because I really don’t speak that way.”

Bunnell thought “Tin Man” had a catchy melody and was a strong enough song — with its chord progression — going into the recording session.

“I’m not a schooled musician, so I’m not using music theory and things. I’m really not applying certain musical-mathematical equations when I write a song,” he said. “A little more now because I’m self-training even more. But then, though, it was finding some chords that sounded good together. It was all just throwing the dart at the board and saying, ‘Oh, I think I got a bullseye there.’”

Creative album covers were still the norm in the 1970s, and when it came time to decide what the Holiday cover would look like, the band members agreed that specific lyrics from the Beckley-written song “What Does It Matter” would be an appropriate concept for the cover: “Look, the lady’s got a photograph, silver-framed, velvet-backed.”

“So we all agreed — hey, let’s make sure the cover kind of mirrors that lyrical imagery: silver-framed, velvet-backed,” said Bunnell. “So now we have to stick a photograph in that frame. Of course, in those days, they always wanted the artists to be on the album cover. Now, the last thing we want is our picture on the album because we’re older.”

Because the songs — especially with Martin’s arrangements — had an old-time feel, Bunnell, Beckley, and Peek decided to wear clothes that reflected a time gone by. They secured an old car from a collector who rented cars for just that purpose — publicity shoots — and headed out to Hyde Park in London.

“The costumes showed up, the car showed up, and we shot the cover,” said Bunnell.

It was indeed a special and heady time for the members of America.

“Right now, as we reach this age, it’s just fun to realize that so many things did happen, and how they are still viable parts of this giant puzzle that is the pop music business,” said Bunnell.

“Going into the AIR Studios equipment room and picking out something, like we needed a bell for a song — and, by the way, that’s the bell we used on ‘Yellow Submarine;’ wow, cool, we’re using the ‘Yellow Submarine’ bell — George made all that very fun.”