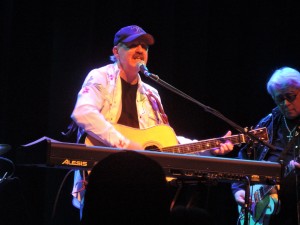 After being dropped by A&M Records in early 1976, the duo wandered for a year or so, not because they were lost, according to Coley, but because they were perfecting their craft in the hopes of landing another record deal. And then their manager, Susan Joseph, brought them the song, “I’d Really Love to See You Tonight,” written by Mississippi-based songwriter Parker McGee.

“We really didn’t want to do it,” said Coley in an interview for The Vinyl Dialogues Volume I, which features a chapter on the making of the duo’s 1976 album, Knights are Forever. “We thought it was more of a female song. But our manager said, ‘Please try it,’ so we did.”

They brought in Louie Shelton, a seasoned session musician who had worked with the likes of Simon and Garfunkel, Stevie Wonder, and the Monkees. He also produced the first couple of England Dan & John Ford Coley albums, and brought in Jeff Pocaro and David Paich, later of Toto, to cut a demo tape of “I’d Really Love to See You Tonight.”

Greenberg was not impressed.

Immediately after the tape had been played, there was a knock on Greenberg’s office door. Sitting in an adjacent room were Doug Morris and Dick Vanderbilt, executives of Big Tree Records, a subsidiary of Atlantic. Founded by Morris, he had sold Big Tree to Atlantic Records in 1974. Morris would eventually go on to become co-chairman of Atlantic before it closed its doors for good in 1980.

But at that moment, Morris and Vanderbilt were interested in “I’d Really Love to See You Tonight” because they had heard the demo tape through the thin walls of Greenberg’s office. 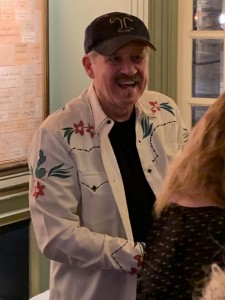 According to the story as related to Coley by manager Susan Joseph, Morris asked Greenberg if he was interested in recording the song.

“Well, Bob, what do you think of that record? You like that? You gonna take it?” Susan Joseph recalls Morris saying to Greenberg.

The single would become the biggest hit that England Dan & John Ford Coley ever had, reaching No. 2 on the Billboard Hot 100 in 1976. It would also go on to anchor the Nights are Forever album, also released in 1976. The title track, “Nights Are Forever,” also written by McGee, was the second single released from the album and it reached No. 10 0n the Billboard singles chart.

“We only had a singles deal with Atlantic, and [executives] were talking about possibly doing an album if the single took off,” said Coley. “And Dan and I were kind of unhappy because we were writing songs all the time, and now some other writer [McGee] comes in and he’s written the song that everybody wants.

“And then we got our first royalty check, and I was like, ‘OK, where are some more songs that other people had written? I think up to that point I had made about $1.98 on the songs I had written all those years.”

So Seals and Coley brought in session musicians and began building an album around “I’d Really Love to See You Tonight.”

“We began to cut this thing, and the players were so great,” said Coley. “Dan and I were so low-key and laid-back. I remember the drummer saying, ‘Man, I just love these low pressure sessions.’ He’d play something and say, ‘What about this?’ And we’d go, ‘Yeah, that sounds good. Just do that.’ The musicians, they weren’t accustomed to that.”

The album, produced by Kyle Lehning, was recorded at the Studio by the Pond — the home of recording engineer Lee Hazen — at Old Hickory Lake near Hendersonville, Tennessee.
Between sessions, Coley and the musicians played a lot of ping-pong, while Seals oftentimes relaxed by fishing in the lake.

“Everything just kind of came together. We had a lot of good players,” said Coley.

Even Dan’s brother, Jim Seals, of Seals and Crofts, played on the album.

“There was a good friend who we used to play with back in Texas named Shane Keister, and he and I doubled up in a band we were in. I played organ and he played piano and Dan was one of the singers.

“So when we came into town, there were certain things that I didn’t want to play. And we pulled Shane in and he did such a wonderful job for us,” said Coley.

A signed “Nights are Forever” album, first released in 1976.
(Photo by Mike Morsch)

Nights Are Forever was the duo’s fourth studio album and their highest charter, peaking at No. 17 in the United States. Two subsequent albums, Dowdy Ferry Road in 1977 and Some Things Don’t Come Easy in 1978 broke into the Top 100. Dowdy Ferry Road featured the single “It’s Sad to Belong,” which reached No. 21; and Some Things Don’t Come Easy featured “We’ll Never Have to Say Goodbye,” which became the band’s second-best charting single, reaching No. 9.

“Dan and I were blue jeans kind of guys, so they wanted us to wear these suits,” said Coley. “And I’ll be doggone if we didn’t wear those suits for like two years.”

Coley said there are actually two versions of the album cover. Once the album began to take off, some “alterations” were made in the cover photo of the two, and the album was re-released as sales continued to increase.

Coley said one of the interesting comparisons about the duo made in the 1970s, was when they were compared to Seals and Crofts.

“Jimmy Seals is Dan’s brother, but they were so diametrically opposed temperamentally that it was staggering,” said Coley. “People would compare Dan to Dash Crofts — both were extraordinarily laid-back. Dan was one of the funniest people you’d ever want to meet in your life. He kept me laughing so much. He was also a very wise man. He was like a gentle giant. Then people would compare me to Jimmy, because Jimmy was quick-tempered and would be down your throat in a New York-minute. And I was right there with him. I’ve mellowed over the years, but it was really an interesting comparison.”

Coley said that becoming a star was never the primary goal for himself and Seals.

“We just loved playing and would go out and play everywhere,” said Coley. “We really didn’t look at it as going as far as it actually did. I thought probably it might last a couple of years and then I would grow up and go off and be as boring as all my friends were. It didn’t work out that way. God kind of has different plans for you.

“I’m still kind of surprised when people say that we made history,” said Coley. “And I go, ‘OK, really?’ For me, I was just having fun. I loved it. I had the best time of my life.” 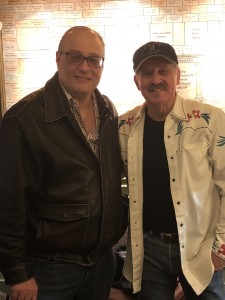 The author and John Ford Coley after the show.
(Photo by The Blonde Accountant)