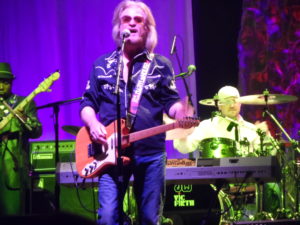 Daryl Hall opened his new “Daryl’s House” – a music venue and restaurant in Pawling, N.Y. – on Halloween night. He was joined by longtime bandmate John Oates for a concert that was streamed online.
(Photo by Mike Morsch)

It was billed as “Hall-oween and Oates,” but thankfully, there was no soul version of “Monster Mash.”

That was never going to happen anyway. Daryl Hall and John Oates would never have a conversation about covering that song in one of their shows, even on Halloween. To do so would severely compromise the integrity of their H&OHQ – Hall & Oates Hipness Quotient.

No, this fright night performance on Oct. 31, 2014, was about something completely different. It christened the new “Daryl’s House” – a renovated music venue and restaurant – that used to be known as the Town Crier in Pawling, N.Y.

It’s the next step in the evolution of “Live From Daryl’s House,” an internet and cable show that Hall has hosted since 2007. Episodes for the show, which airs on the cable channel Palladia, will be filmed there without an audience, but at all other times, the venue’s bar, restaurant and stage will be open for business.

And true to innovative form, this show had something for everyone, even for those of us who couldn’t be there. Because actually, we could be there, right from the comfort of our own family rooms. Yahoo streamed the concert live – and free – online. It was a “Daryl’s House” show that came right to one’s house.

Hall & Oates shows are tight and relatively predictable. There’s not as much between-song banter or storytelling like we get at a John Oates solo show. At a Hall & Oates show, we know we’re going to get the hits: “She’s Gone,” “Sara Smile,” “Rich Girl, “Maneater,” “Private Eyes,” “Kiss on My List.” We all love those songs. We all listen to those songs every time they’re on the radio. We all have those songs in our collections.

And even though we usually hear “She’s Gone” and “Las Vegas Turnaround” in an H&O show, I always want more from the 1973 album “Abandoned Luncheonette,” particularly Hall’s “When The Morning Comes” and Oates’ “Had I Known You Better Then.” I’m partial to that album because the making of it and the songs on it were discussed in length by both Daryl and John for “The Vinyl Dialogues.”

Everybody seemed happy – I know I was – with the show, but nobody more than Daryl.

“This is the way I hoped it would be,” he said toward the end of the performance. “This is a fantastic beginning to a real cool club. We got ourselves a clubhouse. That wouldn’t have happened without fan support, and that’s no joke.
If you haven’t watched it, check Yahoo for the replay. Put the headphones on, turn it up and enjoy the unique Halloween night gig at Daryl’s new house.

There’s no “Monster Mash,” which is a good thing, but this Hall & Oates show is guaranteed to be a “thriller” for you. (Insert appropriate groans here.)

David Knopfler: On his own ship of dreams for 30 years

A musical journey from Springsteen to ‘Springhouse Revival’