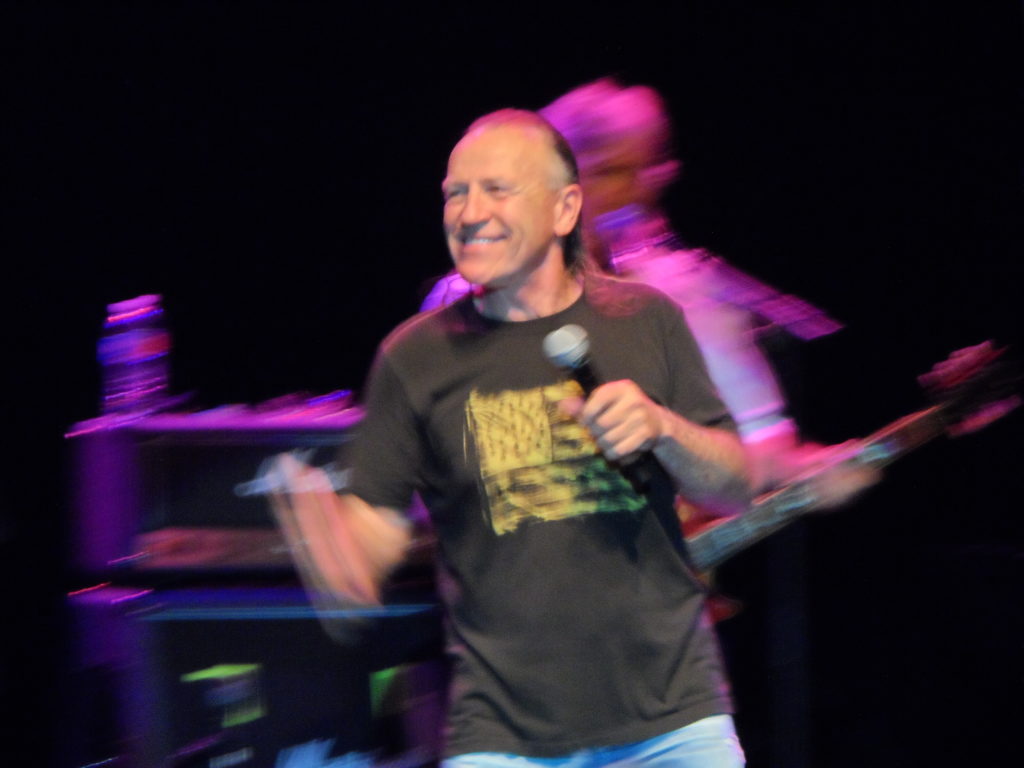 Mark Farner, former lead singer, guitarist and songwriter for Grand Funk Railroad, is still rockin’ on the 2014 Happy together tour.

Howard Kaylan admitted on stage Tuesday night at the Keswick Theatre that the Turtles used to be a drug band. And he added that more than 40 years later, they still are. 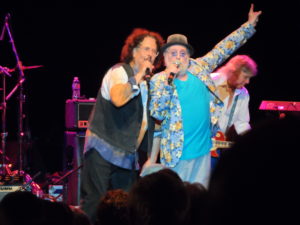 Mark Volman, left, and Howard Kaylan of The Turtles anchor the 2014 Happy Together Tour.

Old-age jokes worked with the packed house on June 24, 2014, in Glenside, PA, because most of us are old now. We’re not ancient, just seasoned. Classic may be a better word. And by the way, we had the best music, you young whippersnappers.

Kaylan, longtime front man for the Happy Together tour, and his Turtles partner Mark Volman, who went on to become Flo & Eddie after the Turtles disbanded in 1970, have been doing the Happy Together gig now for several years. They first started it in the mid-1980s, took some time off, and then revised the idea again in 2010. At one time, the Happy Together tour had 15 stops across the country. This year, the artists will do more than 60 shows, according to Kaylan.

Interviews with Kaylan and Negron are featured in “The Vinyl Dialogues.” Kaylan was a particularly good interview, detailing the southern California music scene in the early 1970s for the chapter on Flo & Eddie.

Collectively, we may be too old to rush the stage anymore – nobody wants to see anybody break a hip – but that doesn’t mean we can’t still rock out. In fact, the crowd was able to stand through the entire three minutes or so of the tour’s namesake song, “Happy Together,” which was the Turtles’ only No. 1 single and in fact knocked the Beatles’ “Penny Lane” out of the Billboard Hot 100 top spot, staying at No. 1 for three weeks in 1967.

Mitch Ryder’s music never much appealed to me, although I do like one of his songs, his No. 4 hit from 1966, “Devil With A Blue Dress On.” Ryder was, however, entertaining in his between-song banter and was engaging with the crowd. At one point, he even sold the fact that former heavyweight boxing champion George Foreman was in the audience, but it was all a ruse to set up a joke.

Three Dog Night has always been one of my favorite bands from the 1970s, and Negron can still sing, although he did not perform my favorite Three Dog Night tune, “An Old-fashioned Love Song.” He was also gracious enough to give a shoutout to his former bandmates Danny Hutton, Cory Wells, Jimmy Greenspoon, the late Joe Schermie, Mike Allsup and Floyd Sneed. Why Negron, Hutton and Wells – the core lead singers for Three Dog Night during the band’s heyday, don’t tour together now is anyone’s guess. Certainly there is history there, but if the Beach Boys can reunite for an anniversary tour, maybe Three Dog Night can as well.

But the highlight of the show for me was Grand Funk Railroad’s Farner. He’s still got rock star written all over him. His voice is still strong, the guitar playing is still excellent and his stage presence – complete with Mick Jagger-esque prancing – is still entertaining.

After the show, Farner even took some time to sign autographs for a couple of dozen fans or so outside the theater. Volman also came out to interact with fans. There was no sign of Kaylan, although I didn’t hang around for more than 20 minutes. He may have eventually come out. Negron, Ryder and Lewis were all escorted to a waiting van by security and didn’t interact with the fans.

It was an entertaining show. The fact that I got through it without breaking a hip was gravy.