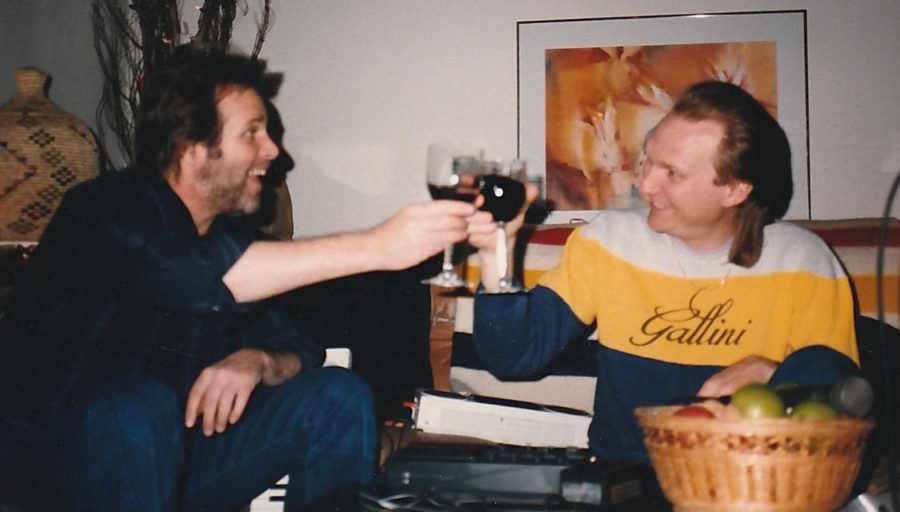 Robert White Johnson’s parents had a cottage on a lake about an hour away from where he grew up in Moline, Illinois. On those weekend drives in the 1960s, Robert and his brother Gary would pass the time in the car listening to Beach Boys records on a battery-operated 45 rpm record player, singing harmony along with the voices on the records.

Two decades later, Robert would be writing songs with Carl Wilson, who along with his brothers Brian and Dennis, cousin Mike Love and high school friend Al Jardine founded the Beach Boys in the early 1960s.

Two songs that were co-written by Johnson and Carl Wilson — “It’s Getting Late” and “Where I Belong” — ended up on the Beach Boys’ 25th studio album titled The Beach Boys, which was released on June 10, 1985. The album got to No. 52 on the U.S. Billboard 200 Albums chart, making it the group’s highest-charting album since the release of 15 Big Ones in 1976. The single “Getcha Back,” written by Love and longtime Beach Boys collaborator Terry Melcher, a singer, songwriter and producer and son of actress Doris Day, made it to No. 26 on the Billboard Hot 100 Singles chart and No. 2 on the Billboard Adult Contemporary chart.

The album is notable for a number of reasons: it’s the first one the band recorded after the accidental drowning death of drummer Dennis Wilson in 1983; produced by Steve Levine, it was the band’s first album to be recorded digitally; it was the last album released  by Caribou Records, a label owned by James Guercio — who managed the Beach Boys in the 1970s and had also managed and produced the band Chicago as well as the Buckinghams and Blood Sweat and Tears; and it was recorded at a time when Brian Wilson — who has little to do with the recording of the album but contributed two songs for it, “It’s Just A Matter of Time” and “Male Ego,” co-written by Love — was suffering from long-term drug abuse and mental illness and was in the clutches of Eugene Landy, a psychotherapist who would become known for his unconventional treatment of, and control over, Brian.

It was into this world that Johnson entered in the early 1980s to collaborate with Carl Wilson, who at the time had become the de facto leader of the Beach Boys due the aforementioned series of circumstances.

“I think the thing – outside of what an amazing human being Carl Wilson was – was his artistry, his music. Every note mattered to him when we wrote,” said Johnson in a telephone interview from his home in Nashville, Tennessee. “When we would work on a song, he wanted to make sure that everything was right, all the little nuances, the melody and the phrasing.”

The story about how he and Carl got together to write features a unique set of circumstances as well, according to Johnson.

After spending a lot of the 1970s on the road, playing every small nightclub and Holiday Inn he could as a member of a cover band, Johnson was discovered by country star Dottie West and her husband Byron, who convinced Johnson to move to Nashville to advance his career. Johnson wrote songs for other artists, like Ronnie Milsap, and eventually formed another band of his own called RPM in 1981. RPM, featuring Johnson as lead singer, released two albums and had a modest hit single titled “A Legend Never Dies.”

At the time, a tape of the band’s music made its way to the office of attorney Peter Paterno, a top music business lawyer then, who happened to be listening to it the day that Jerry Schilling, a music industry professional who had been a member of Elvis Presley’s “Memphis Mafia” — a group of friends, associates and relatives who accompanied and protected Elvis from the beginning of his career in 1954 until his death in 1977 — was in Paterno’s office.

Schilling was also managing the Beach Boys and Carl Wilson’s solo career at the time and he loved the RPM sound. It was Schilling who would eventually introduce Johnson to Carl Wilson.

“Jerry said, ‘You need to get with Carl. You guys would really connect.’ So at a Beach Boys show in Nashville, I met Carl,” said Johnson. “We just immediately connected. There was just this thing. I felt like he was family. He said, ‘Let’s work out some time to write together.’ So over the next couple of years, he would come here [to Nashville] and we would work at a studio. I had a studio that RPM had recorded some recent demos called The Castle – it literally looked like a castle — in Franklin, Tennessee. Beautiful facility, world class. They just let Carl and I go crazy.”

Johnson said that the first time he sang backgrounds with Carl, it was life-changing.

“He had such power and strength in his voice. And I was like, ‘Man, I gotta step up to the plate.’ He encouraged me and we had fun doing it. It was one of those moments in your life where a light goes on and you go, ‘OK, I get it,’” said Johnson.

When the two first started writing together, Carl and his second wife, Gina Martin, daughter of crooner, Hollywood legend and Rat Pack stalwart Dean Martin, had a place in Nederland, Colorado, near Caribou Ranch, where the label Caribou Records recorded the albums it released. Johnson and Wilson would write at Wilson’s home and at the ranch as well.

“I remember Carl put me up the first time in one of the cabins out there [at Caribou Ranch] and I went to have breakfast in the studio area,” said Johnson. “There was this nice guy welcoming me to breakfast. He said, ‘Hey, if you get a chance, sign the book over there. Everybody that comes I have them sign the book.’ After breakfast I went over and opened up the book and there’s names like Elton John and John Lennon. Turns out the guy I was talking to was Jimmy Guercio. Jimmy created this amazing environment at the ranch that probably has never been duplicated anywhere else. It was just a moment in music history.”

For The Beach Boys album, Wilson and Johnson had written “It’s Getting Late” in a Los Angles writing session with Myrna Smith, Schilling’s ex-wife who had been a member of the Sweet Inspirations, the all-girl background singers for Elvis in the 1970s. Wilson and Johnson would write another of the album’s songs, “Where I Belong,” at Wilson’s house in Nederland, Colorado.

“I knew almost every Beach Boys song. I grew up on their music. It was in my heart, my mind, my brain. I always wanted to write a song like that, with Carl,” said Johnson. “I had the basic idea on it. I remember sitting in his living room in his place in Nederland. There was this huge, all glass living room that faced the Continental Divide. It was just such an inspiring place to hang out. This song didn’t take very long. I think I worked a little while longer on the lyrics, but it came together fairly quickly. I had a feeling about that song, if it had a chance it could really do well. The vocals on that song are crazy incredible.”

The first time that Johnson heard a recording of  “Where I Belong” was at West Lake Studios in Los Angeles.

“They were in the process of overdubbing. It’s where I met Steve Levine, who was producing the album. I remember him pulling me aside and telling me it could be huge.  He had fun playing it. He played it for me a couple of times,” said Johnson. “It wasn’t totally finished but was pretty far along by the time I first heard it in the studio. It brought tears to my eyes. All the elements had come together. Here was Carl doing the lead and the guys [the Beach Boys] doing the backgrounds. Steve wanted to get the song right, as far as production, and I thought he did a marvelous job.”

Producer Levine, according to Johnson, was excited about releasing “Where I Belong” as a single off the album, but the record company officials didn’t agree.

“I think if they [label officials] would have followed up with ‘Where I Belong’ as a single, I think it could have been a bridge, and Beach Boys fans would have been into it,” said Johnson. “I think younger people, maybe newer fans, would have liked it as well. Levine was excited about releasing it as a single, but it wasn’t his choice.”

There seems to be some agreement on that. In their book Brian Wilson and the Beach Boys: The Complete Guide to Their Music, authors Andrew G. Doe and John Tobler single out “Where I Belong,” describing the song as “simply magnificent, with block harmonies of almost chilling power.” Doe also praises “Where I Belong” in the liner notes of the album’s 2000 CD reissue as “achingly beautiful” and “the album’s undisputed highlight.”

Johnson and Carl Wilson remained close until Wilson’s death in 1998. For the album Like A Brother — a collaboration of Wilson, Gerry Beckley of America and Robert Lamm of Chicago — Johnson co-wrote the song “I Wish For You” with Wilson. The album was recorded before Wilson’s death but not released until two years later in 2000.

In addition to his work with Wilson, Johnson has contributed songs for Peter Wolf, lead vocalist for the J. Geils Band; B.J. Thomas; Lynyrd Skynyrd; 38 Special; Van Zandt; and Celine Dion, for whom he co-wrote the hit single “Where Does My Heart Beat Now,” which reached No. 4 on the U.S. Billboard Hot 100 singles chart and No. 1 on the Radio & Records Adult Contemporary chart.

In 1995, Johnson formed his own music publishing/production company RadioQuest. He also won a Dove Award in 1996 as producer of the Inspirational Album of the Year, Unbelievable Love, by Larnelle Harris.

But it is Johnson’s time with Carl Wilson that still resonates to this day.

“He was one of the most lovely humans to ever walk the Earth. He didn’t have a mean bone in his body. And the fact that he was that way with all that he’d been through, with all the fame that he had experienced, there was always this humility. He was kind to everybody,” said Johnson. “And I don’t think Carl ever got the accolades that he deserved for his musical contributions, instincts and abilities. If it hadn’t been for him, the Beach Boys would have died a long time ago. He kept it together, he kept it going. He was the heartbeat, he kept it real, vocally and artistically. He was a true inspiration to me, even with his regard to his humanity. It doesn’t take me much to get teary-eyed thinking about him. I was honored to be his friend.”

The traumatic experience that inspired the hit ‘Dancing in the Moonlight’