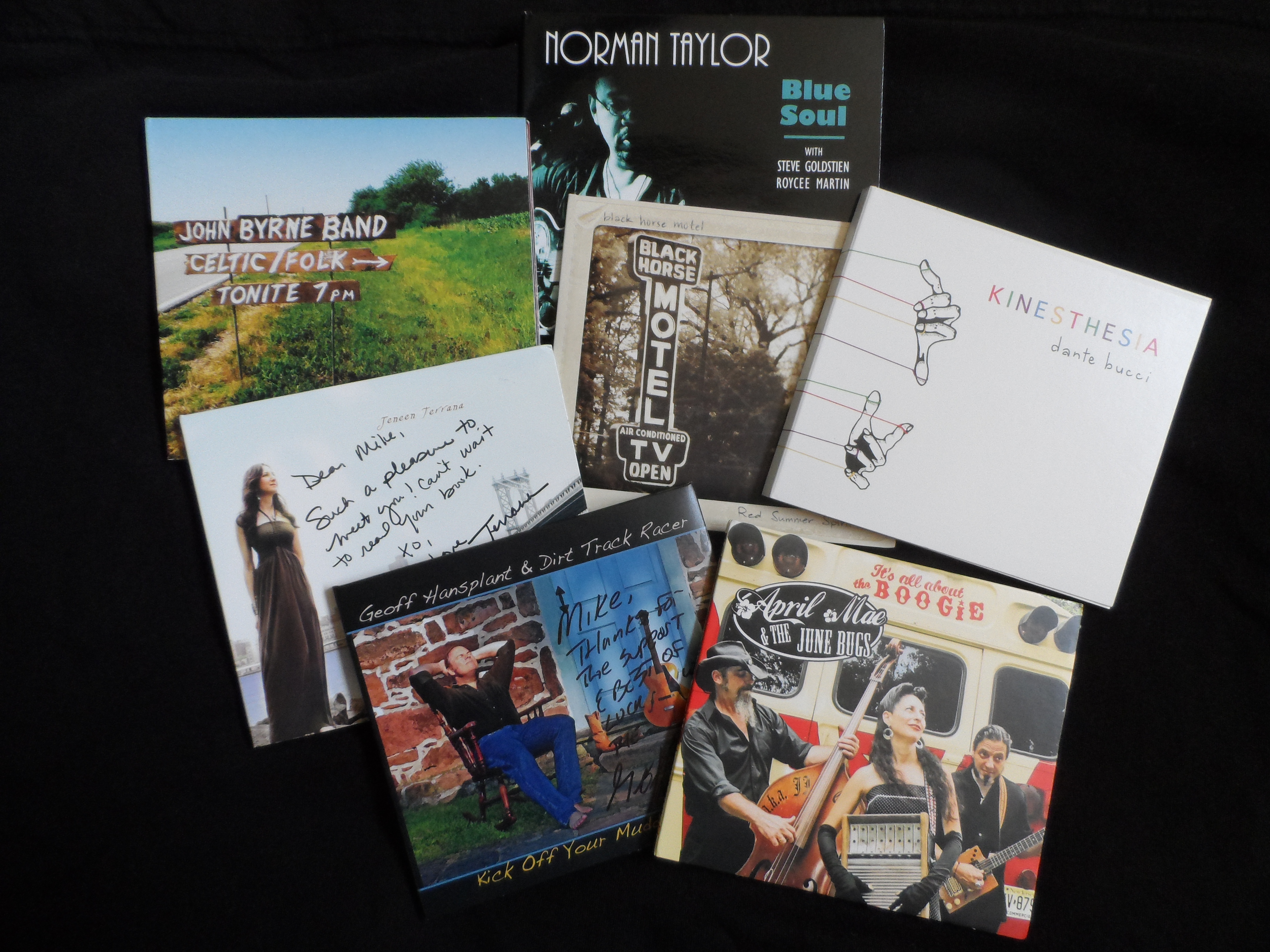 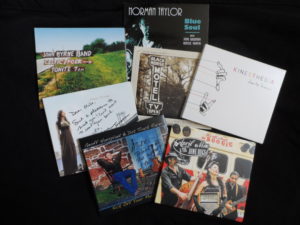 Here are some of the CDs from artists who attended the Philadelphia Folksong Society music co-op at the Keswick Theatre.

Sometimes the cool just kind of sneaks up on you.

That’s what happened to me July 1, 2014, when I got invited to participate in The Philadelphia Folksong Society music co-op at the Keswick Theatre in Glenside, PA.

My friends at the Keswick, General Manager Judith Herbst and Jennifer Muscatello, media and public relations coordinator, asked if I would be part of the event. Apparently after 38 years in the media business and now as an author, I have some insight into the starving artist business that I can share with other starving artists.

But since it was my introduction to the group and the event, I didn’t really know what to expect. Boy, am I glad I attended.

According to Noah Swistak, associate director of the Folksong Society, there are about 90 active artists in the Philly music co-op, several of whom perform at the annual Philadelphia Folk Fest, planned this year for Aug. 15-17 in Schwenksville, PA, (www.pfs.org). The society formed in 2011 as a way to include everyone under one folk umbrella and the Keswick gig provided an opportunity for those artists to meet, network with each others and share ideas.

But the best thing about this get together at the Keswick was the artists themselves. No surprise there as they are the creative people. And creative people are a good hang. Not only did I get to meet several of them, many were kind enough to offer a CD as a way to introduce me to their music. In addition, but I’m an autograph geek as well, so I went all Sharpienerd and got all the CDs signed as well.

Meeting new artists. Cool. Getting into their music. Cooler. Getting them to sign their CDs for me. Gravy.

These are people who put their hearts and souls into their music. Folks who love their craft. One can tell that just talking to them. Many, if not all, have to have day jobs to pay the bills because selling enough CDs and downloads these days is difficult and making a living getting one’s music out in front of paying customers isn’t an easy task.

I’m not a reviewer (and I’m still getting through all the CDs), but some of my favorite new friends from the evening include:

Geoff Hansplant and Dirt Track Racer (www.geoffhansplant.com). A rootsy sound with a bit of a Dylan vibe. And a cool band name.

Jeneen Terrana (www.jeneeterrana.com). I really liked the first track on the “See the Light” CD, “Benny’s in My Head.”

Dante Bucci (www.dantebucci.com). Dante was the one guy there whose work I knew. He’s a master of the handpan, which according to his website is “a melodic steel percussion instrument resembling a steel drum crossed with a UFO.” Whatever it looks like, dude can play it. I’ve seen Dante on percussion a few times over the years for Philly singer-songwriter Mutlu (www.mutlusounds.com).

April Mae and the June Bugs (www.aprilmaeandthejunebugs.com). April Mae and Dave “Catfish” Fecca have a wonderfully unique look and boogie sound, which explains the title of the CD, “It’s All About the Boogie.” “Catfish” is a cool cat, complete with a fish shirt and great facial hair. He even draws a little “catfish” next to his signature.

Black Horse Motel (www.blackhorsemotel.net). I’m about the same age as the parents of the band members, but the CD “Red Summer Spirit” makes me want to see them live. I promise not to yell, “Hey, you kids turn down that loud music!”

The John Byrne Band (www.johnbyrneband.com). Celtic/folk at its finest. Good enough to make me wish I was Irish.

Norman Taylor (www.normantaylormusic.com). Country blues and contemporary acoustic blues all rolled into one Norman. He also draws influence from, among others, ’70s rock and soul, which automatically elevates him high into my Stuck in the Seventies sensibility.

Hawk Tubley and the Bi-Temporal VI (www.hawktubley.com). In an auditorium full of cool band names, this one was my favorite of the evening. I have absolutely no idea what it means. But it’s just another in a long line of fun bands that Hawk has been a member of in his career, including The Hemorrhoids, Eat More Possum, The Freeloaders, Green Eggs and Partial to Mabel. Plus, I liked that his CD came in the same packaging that I used to get my 45 rpm records in as a kid in the 1960s.

Here’s the thing: Wherever you live, there’s likely a local music scene. And while we all like to see the big names in concert, there are some real hidden gems among the local artists. And oftentimes they open for the big names. So listen carefully to the opening acts.

Not all music is good and musical tastes are subjective. But pick out some local artists and give them a listen or go to one of their shows. If you like it, buy the CD and support their efforts.

And the first place to look in the Northeast is right here in Philly and surrounding areas. Take a listen to some of those 90 or so active artists in the Philly music co-op and support the Philadelphia Folksong Society.

You never know when the cool is gonna sneak up on you.