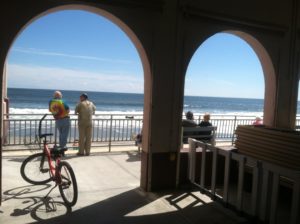 This is the view from Music Pier in Ocean City, N.J. A perfect place to write about music from the 1970s.

In an effort to find inspiration and motivation, I took off Wednesday, Sept. 17, in search of an ocean.

My hope was that the combination of the late summer sea breeze, the sound of the waves, a slice or two of my favorite boardwalk pizza and possibly a leisurely go at a mild cigar after lunch would be just the thing to kick off the Opening Day of Writing for The Vinyl Dialogues: Volume II.

It was a well-calculated plan. I had been watching the weather report for 10 days in advance, trying to free up a day where it was the just the sun and me. And I picked Ocean City, N.J. because it is relatively close and it has an historic concert hall called Music Pier that stretches out from the boardwalk and touches the ocean. I figured that the extra music mojo coming off Music Pier couldn’t hurt the writing process of a book about memorable albums of the 1970s.

I anticipated that because summer vacation season is over and the kids are back in school that the boardwalk would be virtually deserted.

For the most part it was, with the exception of three things I discovered when I got there:
(1) Old people.
(2) Old people.
(3) And old people.

Considering that I am on the doorstep of OldGuyHood myself, it should not have surprised me that other people would have been thinking the same thing that I was thinking on a nice day this time of year. But it did.

Still, I am sometimes surprised at how much I am surprised sometimes.

Having completed four interviews to this point, transcribed the notes, done some research, and let all of that ferment inside my head for several days, I was anxious to get the writing process started. My hope was that I could get first drafts done for two chapters of about 2,500 words each with the ocean as my background music.

I had decided to start with the chapter on the 1978 album “Entertainers On and Off The Record” by the Statler Brothers. Don Reid, lead singer and primary songwriter for the group along with his brother Harold Reid, was the final interview for the first Vinyl Dialogues book. It was such a wonderful interview that I asked him to participate again for Volume II, and he agreed, much to my delight.

It made sense to start the next project right where the first one had left off.

A word here about country music in general and Don Reid specifically. If country music is not your preferred genre, know that the Statler Brothers are one of the greatest country music groups in the history of country music. Their harmonies, songwriting abilities and accomplishments are virtually unmatched in country music. And Don Reid himself is a superstar who doesn’t act like one and a gentleman who does. He is a treasured storyteller and a gracious interview subject, the kind of guy that makes me want to build a porch on the front of my house, buy a few rocking chairs, grab a six-pack of cold beer, invite him over and just listen to him talk for three or four hours on a Saturday night.

To get in the right frame of mind, I rolled down the car windows and listened to “The Best of the Statler Brothers” CD twice on the drive from suburban Philadelphia. It was kind of like a baseball player in the on deck circle warming up by swinging a leaded bat preparing for his turn in the batter’s box.

By the time I got to Music Pier, I was primed to write. I stationed myself in my chair just outside the great music hall in its open air annex, where I could see, smell and hear the ocean, and pulled out my laptop.

And promptly took a nap. Zzzzzzzz. See, writers are Major League procrastinators. And and when it comes to distractions, as previously stated, I can be as much of an old guy as the next old guy.

Fortunately, I was able to recover quickly and banged out a first draft of about 2,500 words on “Entertainers On and Off The Record” with the information that Don had provided in the interview. It took about two-and-half hours.

And then I took another nap. Zzzzzzz. After that, I grabbed a couple of slices of pepperoni pizza from Manco and Manco – if you’re from this part of the East Coast, you know how good it is – a chocolate and mint frozen yogurt cone for dessert, packed up my chair and laptop and drove home.

I didn’t get quite as much work done as I had initially planned, and there is no smoking on the boardwalk so I didn’t get to the cigar. But the writing for The Vinyl Dialogues: Volume II, has officially commenced.

For the first time in my life, I got to create something while peeking at the ocean over the top of my computer.

And it was glorious.