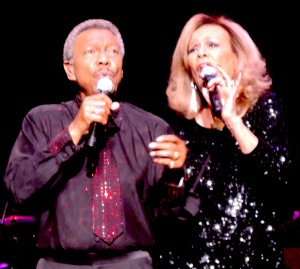 Billy Davis Jr. and Marilyn McCoo performed all their hits June 11 at the Tropicana in Atlantic City.
(Photo by Mike Morsch)

Billy Davis Jr. and Marilyn McCoo admit that when one of their songs comes on the radio, they turn it up because they want to hear themselves.

“The problem is that we’re listening for mistakes,” said Davis. “Did he hit that note? He’s flat, what happened there? Even years later, we’re always critiquing. We’re always listening for something instead of just listening to be listening.”

If their show June 11 in Atlantic City is any indication, then they’re the only ones who can detect any of those hiccups. But for those of us who aren’t Marilyn McCoo or Billy Davis Jr., Saturday night’s performance wasn’t only flawless, it was spectacular.

Let me state right up front that if you’re looking for an unbiased review of the show, this isn’t the place. The following will be completely biased based on personal interaction during telephone interviews with Billy and Marilyn and from seeing them perform live for the first time.

Marilyn McCoo and Billy Davis Jr. are quite simply . . . outstanding in every aspect. Their voices, individually and together, are as good, if not better, than they were in the late 1960s and early 1970s with The 5th Dimension and later as a duo. Their stage presence – storytelling, showmanship, musicianship – are as entertaining and enjoyable as ever. They have surrounded themselves with a group of superb singers whom they call The Next Dimension and a group of highly talented musicians who give a freshness to their classic sound.

And to top it off, when one gets a chance to meet them in person, like The Blonde Accountant and I did Saturday night after the show, they are warm, friendly as as down to earth as any fan could hope.

They are the real deal, both professionally and personally. (See, I told you this was not going to be an unbiased review.)

I’ve had the privilege and pleasure to interview Marilyn and Billy on two occasions: The first was for a chapter in “The Vinyl Dialogues Volume II: Dropping the Needle” on the music and the making of their debut album as a duo, “I Hope We Get to Love in Time” from 1976. That album featured their hit single “You Don’t Have to Be A Star (To Be in My Show).” 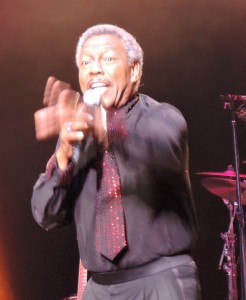 The second interview was just recently, for an advance story on the Saturday show and about The 5th Dimension’s 1969 album “The Age of Aquarius,” which will be featured in a future volume of The Vinyl Dialogues series.

Saturday’s show included all the hits. I’ve always been big on personally sitting in the audience and hearing my favorite artists sing their hits live, those songs that made up the soundtrack of my life. And Billy and Marilyn obliged by opening the show with “Up, Up and Away” and closing it with “Aquarius/Let the Sunshine In.” In between, we were treated to other favorites like “Stoned Soul Picnic” and “Wedding Bell Blues.”

“Laura Nyro recorded and released ‘Wedding Bell Blues.’ And she wrote it about a guy named Bill in her life,” said McCoo of the Nyro version that was first recorded in 1966. “The song was a hit in California, but it didn’t do as well across the country. So when we were listening to material for our album (“Age of Aquarius”), Bones (5th Dimension producer Bones Howe) had suggested that I record it because Billy and I were going together at the time. He thought it would be a lark. So we said, ‘Why not? Sure,’ having no idea that it would ever be a single.”

Surprisingly – at least to me – was that the songs that first brought the audience members out of their seats were not those by The 5th Dimension or by Billy and Marilyn as a duo, but covers of other artists’ songs. 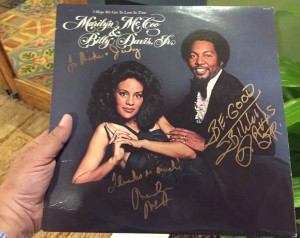 Marilyn knocked it out of the park with a solo on “Never My Love,” which was a hit for The Association in 1967; and Billy followed that up with a rousing solo on “McArthur Park,” written by Jimmy Webb (who also wrote “Up, Up and Away”). That’s the “someone left the cake out in the rain song,” and I have to admit, it’s never been a favorite of mine. But the performances on those two songs convinced me – as if I need any more convincing at this point – that Billy and Marilyn could sing names out of a phone book and make it sound spectacular.

The show also featured a musical tribute to the Beatles that combined a video about the civil rights movement that was especially poignant and pertinent in today’s world.

As guests of Marilyn and Billy for the show, The Blonde Accountant and I got the chance to hang around afterwards and meet them. And they were delightful. It was the perfect end to the evening, and we got a chance to get an autograph and have our pictures taken with them. Since I had previously written about the “I Hope We Get to Love in Time” album, that’s the one I got signed. 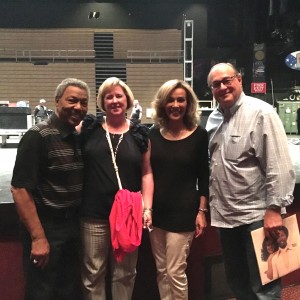 The concert was a sellout, and rightfully so. Billy and Marilyn hadn’t performed in Atlantic City in several years and their return to the East Coast was welcomed by the fans.

Our summer concert schedule is in full swing. We’ve already seen Boz Scaggs, Art Garfunkel and Southside Johnny and the Asbury Jukes. And we’ve got tickets for Peter Frampton, Bob Dylan, Hall & Oates, Steely Dan and Bruce Springsteen to fill out the rest of the summer.

But I wouldn’t be surprised if at the end of the year, when I look back on the shows we’ve seen, that the performance by Marilyn McCoo and Billy Davis Jr. in Atlantic City Saturday night isn’t right at the top of the list.

They are just that good.