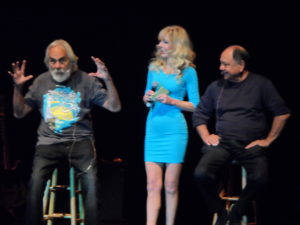 Tommy Chong, his wife Shelby Chong, and Cheech Marin performed at the Keswick Theatre in Glenside, PA, in October 2013.

Cheech and Chong deserve to be considered for the Rock and Roll Hall of Fame and here’s why: Because they have four hit singles on their resumes.

What Cheech and Chong contemporary comedian from the 1970s can boast the same recording credentials?

Those comedians were certainly big-time recording artists in the 1970s and there are a boatload of Grammy nominations among them. But no Top 40 singles.

Steve Martin would the be exception to this among comedians in the 1970s. A top-notch banjo player, which he incorporated into his comedy act, Martin released the song “King Tut” as a single in 1978 and it reached No. 17 on the Billboard Hot 100 chart.

But Cheech and Chong were doing something in the 70s that few comics were doing then by incorporating music into their act on a regular basis. (They talk about the inspiration for “Basketball Jones” and the recording of the album “Los Cochinos” in “The Vinyl Dialogues.”)

Other comedians of that era would record their live acts and put that on an album. Cheech and Chong would go into the studio and actually write music and arrangements. At the time, that didn’t fit the comedy format.

Which is another reason they should be considered for the Rock and Roll Hall of Fame: What they were doing was pretty innovative for its time.

When it comes to the criteria that is used for enshrinement into the Rock and Roll Hall of Fame, there’s apparently no real formula. The diversity of the acts already enshrined in the R&RHOF makes the process subjective.

According to the R&RHOF website, though, among the factors considered include “an artist’s musical influence on other artists, length and depth of career and the body of work, innovation and superiority in style and technique.” But “musical excellence shall be the essential qualification of induction.”

How does Cheech and Chong stack up to that? Well, “Earache My Eye” has been covered by several bands, including by Korn on its album “Follow the Leader” and by Soundgarden on its “Coverin’’ album. Cheech and Chong’s body of work has both length and depth, covering stage, screen and records; and the innovation of what they were doing in the ’70s with music on their albums has already been discussed.

That leaves musical excellence. Aside from the four singles already mentioned, there’s the song “Mexican Americans” from the 1978 movie “Up in Smoke.”

If that’s not comedic musical excellence, then what is?

Welcome to The Vinyl Dialogues Blog