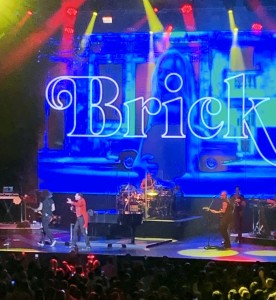 He dedicated the next song to the woman who had just received the rock, which was the 1977 Commodores hit “Brick House.” It’s a great song, and the story behind it was detailed for me by William A. King of the Commodores for “The Vinyl Dialogues Volume III: Stacks of Wax.”

By the mid-1970s, the Commodores had developed a routine for recording albums. Band members would get together in the middle of October and spend about two months choosing and arranging songs, take a couple of weeks off for Christmas, fly to Motown Records in Los Angeles and spend January and February recording, release the album in the spring and tour in support of the album in the summer.

When the band — William A. King, Ronald LaPread, Thomas McClary, Walter Orange, Lionel Richie and Milan Williams — was getting together songs for its fifth studio album, the self-titled “Commodores” in late 1976, members had chosen and arranged eight songs for the album. They needed one more, though.

But everybody was worn out.

“We had done eight songs and we could not choose the ninth song. Everybody was desperate, everybody was tired, didn’t want to see each other anymore, wanted to go home. We had seen each other every day, seven days a week, for two months,” said William A. King, band’s trumpet player. “We decided to just do something quick, because we only had two days left to get the songs prepared before we left for L.A.”

They all agreed to just throw something together quickly. So Walter Orange sat down at the drum kit and started tapping out a beat. Ronald LaPread added the bass, while King and Richie tried to figure out the horns part to go with it. Thomas McClary added in guitar and Milan Williams joined in on keyboards.

“We were just jamming,” said King. “And we finally got a basic track down.”

There were no lyrics to the riff, so it was suggested that King and Orange both head home after the session and try to write some words to go with it. But time was of the essence. The band needed the lyrics the next day if it was going to complete the ninth song for the album before heading to Los Angeles to record.

“At that time we had cassette tapes, so I was playing it over and over and over again. I was just trying to figure out a starting point,” said King. “But I knew it was going to be about a woman.”

But even after getting home that evening and playing the cassette over and over, King was still stuck. It was getting late, and King’s wife, Shirley Hanna-King, was running out of patience.

“She said, ‘Look, why don’t you turn that tape off? You’ve played it a thousand times; don’t you have that melody in your head yet?’” King recalled his wife saying. “I said, ‘No, I don’t, which is why I keep playing it over and over again.’”

But Shirley Hanna-King had heard enough and retired to a different part of the house where she didn’t have to listen to the tape.

Eventually, King himself ran out of steam.

“I fell asleep, literally with the tape on. It just ran out,” said King. “When I woke up, I had a pad of paper and pencil on my chest. I looked at it and it had all these lyrics written on it. I was looking at it thinking, ‘God, those are some good lyrics.’ And then I looked at the handwriting and it was my wife’s handwriting. So I asked her, “Did you write this?’ And she said,

‘Yeah, I had to do something to keep you from playing that tape all night long because we couldn’t get any sleep.’”

King took the lyrics to the next day’s session and presented them to the Commodores.

Orange had also done some writing the previous evening, and between the two of them, King and Orange combined their lyrics and came up with a song that would be about a woman who was built like “a brick shithouse.”

The song was “Brick House.” But James Carmichael, who was producing the “Commodores” album, still wasn’t sold on it being the ninth and final song for the record.

“Carmichael wasn’t convinced,” said King. “He listened to it and said, ‘Eh, I’m not too sure about this song.’”

But Orange was. So unbeknownst to the other members of the group, he took the assistant engineer into an adjacent studio, had the track put on and then Orange started singing over the track, adding in the lead vocals. He then took the revised track back to Carmichael and the Commodores to hear the results.

“And everybody went, ‘Oh my God, this is really nice.’ That’s actually how the song got on the album, because Walter went in there and did a demo vocal over it, which convinced everybody that the song was worth going on the album,” said King. “It probably would not have even made it onto the album. We would have just done one fewer song on the record.”

But it wouldn’t be the only hit single from the “Commodores” album, which was released on March 30, 1977. There would be another single that was even bigger.

Richie had a song that, according to King, he must have rewritten a dozen times once the band had gotten to Los Angeles to record. Richie would go into the bathroom at Motown Records, write the lyrics and bring them back out to the band.

“Either Carmichael or one of the guys would go, ‘Eh, these suck.’ And Lionel would go back into the bathroom,” said King. “We had this thing we used to say: ‘Has anybody seen Richie? Oh, he’s in the bathroom.’ The lyrics for that song were written in the bathroom at Motown Studios in Los Angeles.”

If you get a chance to see Lionel Richie, buy the ticket. Richie is still in fine voice, he’s a fabulous entertainer and it’s an evening of hit after hit after hit.